OVERVIEW:Take part in the eternal struggle between two extraordinary assassins.• Take on the role of Colt as you search for a way to put an end to a timeloop trapping Blackreef while being hunted by the island’s inhabitants.• Use powerful weapons and abilities to take out eight key targets across the stunning and chaotic island before the day resets.• Lurking in the shadows is rival assassin Julianna whose sole mission is to take Colt out and keep the loop going. Learn from each cycle, try new paths and approaches to break the loop once and for all.KEY FEATURES:Signature Arkane gameplay:Fight to survive a deadly game of hunter vs hunted as you immerse yourself in first-person action armed with a powerful roster of otherworldly powers and savage weaponry. Choose your preferred playstyle, from sneaking your way through each level to barrelling gun-first into the fight.Blend single-player and multiplayer gameplayExperience the main story as Colt as attempts to break the loop and earn his freedom. You can also take control of rival assassin Julianna, sneaking into another player’s campaign and keeping him imprisoned in the loop by killing him. The multiplayer experience is optional, and players can choose to have Julianna controlled by AI within their campaign.Knowledge is powerEach new loop in is an opportunity to learn from the past and adapt. Finding clues and uncovering hints is key to taking out targets before the day resets. Discover relationships, learn schedules and do whatever it takes to gain the necessary knowledge. Apply what you’ve learned in previous loops to devise other new strategies and eventually reach your targets.The island of BlackreefExplore Arkane’s artful world of multiple pathways and emergent gameplay as you immerse yourself in Deathloop’s stunning, retro-future, ‘60s-inspired environment. Blackreef is a stylish wonderland imprisoning Colt, a world ruled by decadence where death has no meaning, and delinquents party forever while keeping him captive.PS5™ features• Stunning visuals: The PS5 console brings Arkane's unique artistic vision to life like never before, allowing players to explore the visually stunning 1960s-inspired world of Deathloop in beautiful 4K at 60FPS with HDR, or through a specific mode with Ray-traced sunlight shadows and ambient occlusion*• Adaptive triggers: Adaptive triggers bring new levels of immersion. Each weapon in the arsenal has a distinctive trigger pull. Blocked triggers alert players to jammed guns. Hitting or missing with a machete attack has a different sensation. With adaptive triggers, each encounter feels unique in the player’s hands.• Fast loading: Thanks to the power of the PS5 console's ultra-high speed SSD, your next loop is just a handful of seconds away. If at first you don’t succeed… die, die again; and don’t worry about loading times.• Haptic feedback: Haptic Feedback allows players to feel their experience like never before in an FPS. Each ability and weapon in your arsenal gives unique feedback. Each movement type (running, climbing, sneaking) provides a different sensation. Players will feel the stark contrast of surfaces as they battle through stunning environments.

Sorry for the inconvenience, we appreciate your feedback. Our deliveries are fulfilled by nearest Sony store and most of the time our partners are doing self deliveries. We will share this review with concerned team and take corrective steps so you get best experience in next purchase.

Amazing game with clever puzzles. The gunplay is fantastic and satisfying. It also has a good story with stellar acting performances. The only disappointing thing to note is this will be the last Arkane Game for PlayStation platform. 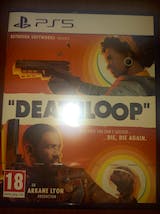 We really appreciate you for taking the time out to share your experience with us. We look forward to serving you again in the future!